Is it okay to feed ducks?

Much like feeding the birds you may feed in your backyard, there is nothing wrong with feeding other wild birds, and especially ducks, food, as long as it is the right food. Unfortunately, most people associate feeding ducks at a park with giving them bread, which is definitely the wrong food.

This association likely goes as far back as 4000 years ago, when ducks were first domesticated in Southeast Asia. The common Mallard, which we see in all city parks, is the ancestor of the “Peking duck” which we see on dinner plates, and is just a breed that was created by overfeeding it rice, and that likely expanded to bread (probably stale bread) or other scraps people had laying around. 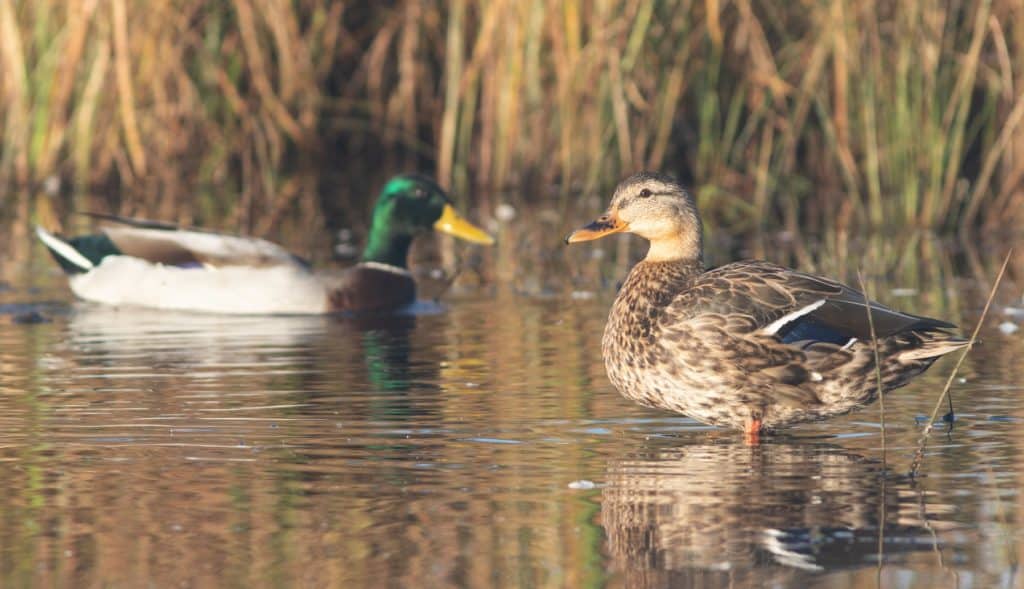 So what is the problem?
Our current problem is that giving bread to wild ducks is basically like giving them candy. There is virtually no nutritional value in it, especially white bread, but the birds only know it is a free and abundant food source (that we are providing) so they fill up on those “empty carbs” instead of nutritional natural foods.

This improper nutrition is especially harmful in young and developing ducks. A result is a syndrome commonly known as “angel wing,” when a duck’s (or other bird’s) wings grow improperly, typically presenting as a twist in the last joining of the wing, causing the remiges (wing feathers) to point outward from the body. This is caused by an unnaturally high calorie diet (high in proteins; low in vitamin D, vitamin E, and manganese) which causes most of the wing to grow faster than that last joint in the wing. In most cases this syndrome is incurable and typically fatal as it negatively affects the feather’s insulating properties, and can make a bird flightless.

Is there anything I can feed ducks?

In the wild, Mallards are omnivorous and opportunistic. That means they take advantage of the best foods when they are most abundant: larvae of flies, midges, and dragonflies, plus other aquatic invertebrates like snails and freshwater shrimp in the summer when they are breeding. In winter, their diet is mostly made of seeds, and aquatic vegetation, specifically acorns, corn, rice, and wheat.

So if you still want to enjoy feeding ducks, make sure you are offering something similar to what they would naturally be feeding on. Some great options are lettuce or cabbage (if ducks drove cars, they’d almost certainly have one of those “Eat more kale” bumper stickers). Other things you can give them are: corn (not popcorn), rice, peas, broccoli, tomatoes, and most fruits (not citrus). If you are going to feed ducks, or any bird, it is important to remember that all of this should be done in moderation.