Portland Youth Corps is a collaboration between Portland Parks and Recreation, Maine Audubon, and Portland Parks Conservancy. Its mission is to promote personal and professional growth through community service, environmental stewardship, and hands-on conservation opportunities within Portland’s beautiful parks. Youth Corps members are aged 14 to 17; two sessions of teens spend four weeks during the summer working on projects throughout Portland.

In this series of photo albums, Maine Audubon’s Seasonal Youth Programs Assistant Carly Rahl, a co-leader for the program this summer, gives us an insider’s look into the work done by the two Summer of 2022 crews.

Thomas Klak, a professor at the School of Marine and Environmental Programs at the University of New England and Gene Conservation Chair for the Maine Chapter of the American Chestnut Foundation, is working to research and restore the American Chestnut. At a farm in Cape Elizabeth, he is experimenting with chestnut seedlings that have one added gene to make them blight resistant. PYC’s Crew 1 got a chance to work at Dr. Klak’s chestnut farm, and then returned to their original work site at Portland Arts and Technology High School to plant chestnuts there. For more information about this native planting, check out the blog post about the PATHs planting here.

The crew spent a day out on Jewell Island, one of Casco Bay’s outermost islands, with Maine Island Trails Association (MITA). They were  helping MITA create a rock wall on the shores of the island. This new rock wall will help mitigate erosion on the banks of a steep hill, the site of a popular campsite and fire pit. Every year, this exposed area loses several feet of land due to erosion from heavy winter storms. The crew placed boulders on the bottom of the steep edge which MITA hopes will help reduce the amount of erosion in future years and help stabilize this area over time. Crew 2 spent a week working on the trails at the Presumpscot River Preserve in Portland, focusing mostly on the loop trail. The team removed roots from the trail, added trail surfacing, removed invasive species, and created a new switchback. The crew decided to reroute the trail in a steep area, and created a new part of the trail to be a switchback around this steep slope. The new switchback site also featured a nice clearing, next to many native plants already existing in the site. This clearing was selected as a planting location for the addition of several native plants. This planting can be seen right from the edge of the new switchback, so be sure to visit Presumpscot River Preserve’s loop trail to check out the plants and new trail! 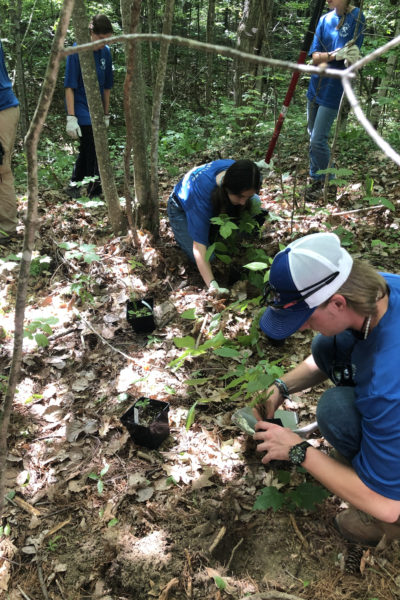 Crew 2: On the beaches with the Coastal Birds Crew

Maine Audubon works to protect and conserve Piping Plovers and Least Terns. Their work involves placing management, like fences to keep the public from walking on nests and exclosures to protect birds from predators. At the end of the plover nesting season, Crew 2 spent a day on the beach helping the team remove exclosures from a beach in Kennebunk. At this point in the season, the eggs have hatched, babies have fledged, and the exclosures can be safely removed. After another tremendous season, the 2022 Bringing Nature Home Plant Sale is coming to a close. The last day for ordering your native plants will be Friday, September 30, with final pickups occurring the following Thursday (October 6) and Friday (October 7) curbside at Gilsland Farm in Falmouth. There’s still plenty of time to get […]

Late summer is a wonderful time for observing Ruby-throated Hummingbirds foraging in the garden, and an even better time for planning fall plantings to benefit your visiting hummingbirds next summer. There are many native plants that hummingbirds utilize for food, and providing a variety of these plants that bloom throughout the season is a great […]

It’s not always easy to identify Maine’s most beloved birds. Maine Audubon biologists and naturalists commonly field identification questions along the lines of “is it this, or is it that?” Many species look similar from a distance, but there are some great telltale signs, both visual markers and behaviors, that can help identify species. This […]

It was great to be back on the water for our annual pelagic trip out of Bar Harbor, after not running this trip since 2019. The offshore passage of Hurricane Earl sent some swells towards the Gulf of Maine, and some concerning forecasts leading up to the trip, but the day was absolutely incredible! Long […]

COMMONLY MISIDENTIFIED SPECIES: It’s not always easy to identify Maine’s most beloved birds. Maine Audubon biologists and naturalists commonly field identification questions along the lines of “is it this, or that?”. Many species look similar from a distance, but there are some great telltale signs, both visual markers and behaviors, that can help identify species. This […]