In the same way that blossoms started to unfurl and migratory birds began to appear, so too did restless Maine Audubon staffers, tentative at first, and then all at once in a glorious riot of activity.

May was the busiest month we’ve seen in ages, in terms of our interaction with the public. We’re back connecting with people, doing what we love to do! So sit down, grab a beverage, and get set to read this detailed account of what we’ve been up to this month, as we meet the public, get our centers ready for visitors, open our nature stores, and help nesting wildlife have successful breeding, nesting, and young-rearing seasons.

COASTAL BIRDS: The plover crew has been out on 20+ beaches since late April, tracking returning Piping Plovers and Least Terns from Phippsburg to York, erecting management and building exclosures, educating the public, training volunteers as they anticipate a very busy summer. Not only will people be eager to get out and onto the beaches, the birds are already hitting record numbers. The latest count: an extraordinary 97 active nests! Coming next: chicks will start hatching!

WARBLER WALKS: Staff naturalist Doug Hitchcox, assisted by volunteers and other staffers, led 10 days of bird walks in Evergreen Cemetery. Doug was also out leading bird walks for the Friends of Fort Williams, Outdoor Afro, and Make A Wish, just to name a few! He was also a member of the record-breaking World Series of Birding team, which included Bob and Sandi Duchesne, Turk Duddy, Linda Woodard, and Nick Lund, who spent 24 hours birding on May 8 to raise money and awareness for Maine Audubon and Maine’s wildlife habitat. Coming in June: Both Doug and Nick will be at birding festivals in June including the Downeast Birding Festival, the Acadia Birding Festival and the Rangeley Birding Festival. FISH FRIENDS: Education staffers Molly Woodring and Catherine Griset released their salmon into the wild, after raising them from eggs in the Fish Friends program. The video series Salmon Shorts documented and provided background for the whole cycle of life for our endangered Atlantic Salmon. Coming in June: The salmon raised at Fields Pond will be released into the wild with fourth and fifth grade students involved in the River in My Backyard program at Fields Pond on June 7. LOONS: This month Conservation Biologist Tracy Hart teamed up with Fields Pond Manager David Lamon and Fields Pond Program Assistant Michelle Duffy to build and install a loon nesting raft at Fields Pond. Tracy hopes this will be a larger expansion of the Maine Loon Project. She emphasized that rafts are only recommended in certain cases; used incorrectly they can reduce loons’ chances of successful nesting. “Rafts can help loons whose nests fail again and again due to fluctuating water levels, shoreline predators, or disturbance from human activities onshore.” Fields Pond Manager David Lamon said, “Having a nesting raft here will also be a great educational tool to help visitors learn more about loons and the challenges they face.” Coming up: The Annual Loon Count on July 17, 2021.

BIRDSAFE MAINE: The BirdSafe Maine initiative is in its second season of collecting data on birds striking windows in Portland. A dedicated team of staff, volunteers, and students from our partners at University of Southern Maine have been out very early every morning in April and May walking a two-mile route in Portland to look for bird strikes. Advocacy and Outreach Manager Nick Lund, with help from Doug Hitchcox, also installed the first bird-safe window at Gilsland Farm, as we plan to create a demonstration site with our partners at the Portland Society for Architecture so developers and homeowners can see various bird-friendly glass options in place. Coming up: More window treatments will be installed at Gilsland Farm.

OUTDOOR LEARNING: Work on the new outdoor classroom has begun! Thanks to a generous grant last fall from Jane’s Trust, Maine Audubon is replacing our beloved Instructional Tent at Gilsland Farm with a new post and beam structure designed and built by Maine Barn Company. Properties Manager James Kennedy has been hard at work on all stages and facets of construction. Coming up: Final stages are scheduled for June and July. EMERALD ASH BORERS: Youth Programs Manager Catherine Griset worked with Colleen Teerling and Jim Britt from the Maine Department of Agriculture, Conservation, and Forestry on girdling a tree at Gilsland Farm to detect Emerald Ash Borers. Girdled ash trees, called trap trees, are used to detect emerald ash borer (EAB). The stressed tree releases a scent that will attract nearby EAB. The tree will be removed and examined for EAB in the fall to see how far it has spread. EAB is an invasive insect that is killing ash trees throughout much of the United States, and it has recently been found in Portland. The state is creating a video for landowners who may be interested in participating in tree girdling, and Catherine will be partnering with Brooke Teller, STEM Coordinator at the Portland Public Schools to create videos for fifth-grade students next year. NewsCenter Maine’s Don Carrigan came to Gilsland Farm to interview Colleen and Brooke this month and show Catherine putting signage on the tree (Watch the news segment here). Coming up: The tree will be cut down in September and analyzed for traces of EAB.

FORESTRY FOR MAINE BIRDS: Conservation Director Sally Stockwell was all over the state in May; leading a walk at China Community Forest and doing Forestry for Maine Birds workshops including one for SAPPI at the Yankee Woodlot in Skowhegan (photo below). Coming up: She has several scheduled in June (including one in Solon on June 5) so if you’re interested in learning how to manage woodlands with birds and other wildlife in mind, contact conserve@maineaudubon.org for details.

STREAM EXPLORERS: Sally and Conservation Program Associate Hannah Young were in the field–actually, in the stream–this month training volunteers to be community scientists in the Stream Explorers program, a program to survey aquatic macroinvertebrates and water quality. It’s not too late to join. Learn more at and contact conserve@maineaudubon.org for details.

MIGRATION TOOLS: Maine Audubon is joining a massive international effort to track animal movements through automated radio telemetry, a project called the Motus Wildlife Tracking Network. In May, Motus towers went up at Hamilton Audubon Sanctuary and Fields Pond Audubon Center. Coming in June: Dr. Amber Roth, University of Maine Assistant Professor of Forest Wildlife Management, will begin tagging bobolinks with nanotags at Fields Pond as part of research that will use the Motus data. BRINGING NATURE HOME: Education Director Eric Topper led more than a dozen online programs for Bringing Nature Home, Watershed Week, and Arbor Week, in May but also managed to get outdoors and in the public eye with some visible habitat restoration projects, at Willard Beach in South Portland (pictured below), to name just one. The City of South Portland used backhoes and excavators to remove thickets of Rosa rugosa, bittersweet, and numerous other invasives at Willard Beach. They cut invasives in the fall, dug out the seed bed, sifted it off-site, and returned it as clean fill. In May, Eric began planting native plants in the highly visible and heavily trafficked area.  Coming in June: Eric, along with Properties Manager James Kennedy, Nikki Oteyza and the rest of the horticulture staff have been busy getting ready for the native plants sale which begins on June 1. SCARBOROUGH MARSH: Scarborough Marsh Audubon Center opened Memorial Day weekend! Manager Linda Woodard and her team were busy renting boats and talking to visitors. The center will be open on the next two weekends, and opening daily on June 19. There’s still time to register for the Snowy Egret Virtual 5K. You can run or walk on a course of your creation any time between now and June 4 for this annual fundraiser for Scarborough Marsh. Go to snowyegret5K.org to learn more and to register.

This list might seem long and yet, it doesn’t include any of our advocacy work on renewable energy siting, legislative behind-the-scenes work during the current session, and countless other projects that our staff are working on that just might not be in the public eye as much. Thank you if you’ve read all the way to the end, and thank you for your support of Maine Audubon and for your commitment to Maine’s wildlife and habitat. 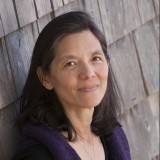