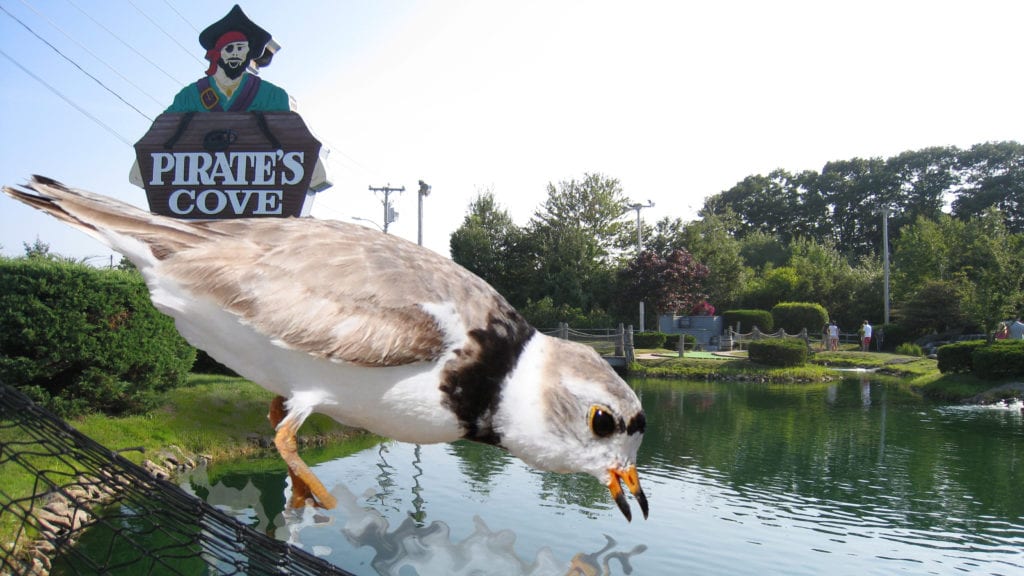 Birding enthusiasts have begun flocking to Old Orchard Beach following reports that a rare 50-foot Piping Plover has been spotted roaming around the popular summer destination.

Maine Audubon biologist Laura Minich Zitske, who directs the Piping Plover and Least Tern Project, said that while sightings of enormous plovers are quite unusual, they aren’t unheard of.

“There have been occasional reports of plovers the size of Volkswagens in Florida and the Carolinas,” Zitske said. “It’s been a while since we’ve seen a Charadrius melodus giganticus this far north. Especially one this big.”

The plover — affectionately nicknamed “Buddy” by locals — has been seen in various popular places throughout town. Experts estimate his size at approximately 50 feet from beak to tail, but no one has yet been willing to try measuring him by hand.

“Most Piping Plovers are pretty small, about seven inches in length,” Zitske said. “If our estimates are correct, Buddy is approximately 85 to 100 times larger. This is definitely somewhat abnormal.”

While plovers typically feed on insects and small invertebrates, Buddy has been seen peeking into the windows of restaurants along the beach, reportedly in search of pier fries and fried dough.

According to an archival search of The Kennebunk Chronicle, the last time a plover this size was seen in Maine was in the summer of 1957 at Mother’s Beach. His presence caused mass hysteria at the time, and the episode inspired the critically-acclaimed film Attack of Plovzilla: Terror at Mother’s Beach.

Due to the unusual nature of the sighting, Maine Audubon Staff Naturalist Doug Hitchcox is adding an impromptu van trip to his schedule of birding trips in order to visit Old Orchard Beach this afternoon.

“I’m so pumped,” Hitchcox said. “We’ve been waiting for a sighting like this for years. This is basically Bigfoot for birders.”

As always, Maine Audubon will keep you posted on any new developments in this story. Become a member now (at a special April discount in honor of Earth Day) to be sure you get the latest updates.