How to see a Little Egret | Maine Audubon

Birding has many interesting aspects. Birds offer plenty of exciting opportunities for discovery — from learning to the basics of identification to exploring the migratory timing or even just admiring them from your window. One of the most exciting aspects for me, is finding a rare bird. On June 8, 2015, I was lucky enough to find a Little Egret at Gilsland Farm and amazingly the bird is still being seen (over a month later). I’ve been compiling a few tips for anyone who may want to try to see it. First, here is a little background if you’re wondering what a Little Egret even is.

Tip 1: Know what to look for.
Telling the Little Egret from a Snowy Egret is difficult if you don’t know what to look for. The most obvious difference will be in the head plumes of the two. Little Egrets (typically) show two long, thin, ribbon-like plumes, while the Snowy Egrets’ plumages tend to be shorter and bushier. David Allen Sibley has a great comparison of this on his blog.

There are other differences but they are more subtle: the lores (the skin between the eye and the bill) are gray on a Little Egret while they are yellow on a Snowy Egret — this is surprisingly easy to see at a distance so it is a good thing to look for if you have a less-than-desirable view. A Little Egret’s bill is also slightly longer and more dagger-like than a Snowy’s (more like a Tricolored Heron). The Little Egret has a slightly lankier appearance, mostly being a little longer necked. Also, the feet on this individual are a greenish-yellow color, unlike the bright golden-yellow we see on our Snowy Egrets. Gilsland Farm (Audubon Sanctuary) — almost all sightings from here have been in the North Meadow, which is the first large meadow on your right as you drive into the sanctuary. There is a small lot on the edge of the meadow or plenty of parking space further down near the buildings. I recommend walking the loop around the meadow to reach the “blind” near the marsh. Do this by walking towards the barn and community garden then stay on the trail that wraps behind the solar panels. The blind is about ⅓ of a mile from the road.

Providence Ave. — This road dead ends at the edge of the marsh visible from the North Meadow at Gilsland Farm. It is easier to drive up to but this is private property. So far, I haven’t heard of any upset landowners but I would strongly recommend using the free and public Gilsland Farm rather than risk upsetting the locals.

Tidewater Farm — Just north of Gilsland Farm, this demonstration garden provides access to a section of the marshes not visible from Gilsland Farm. Charles Duncan recently gave a good description on Maine-birds of how to access this site: “from US1 in Falmouth, turn onto Clearwater Drive (near Walmart) and take the first right, onto Farm Gate Rd. There is a small sign that says Tidewater Farm. Continue through the expensive housing development until you see another such sign pointing left on a dirt road. Follow that dirt road a short distance to its end and park in the spaces on the left. Walk between the shed and an abandoned house along a mowed path with a Portland Trails sign. Go out to the end of the path to get the best view.”

Back Cove, Portland — Although there haven’t been any sightings of the Little Egret here recently, there is no reason to think that the bird couldn’t still be going here to feed. Accessibility can be difficult but it is fairly easy to drive Baxter Boulevard and look for egrets feeding in Back Cove. If you see any, park near Payson Park or there is a large parking lot near the south end of Back Cove, both of which are within walking distance.

Presumpscot Street Marsh — This small marsh occasionally has herons and egrets feeding in it and sure enough the Little Egret has been found here as well (although has not been seen here recently). It is a really bizarre location but may be worth checking: http://ebird.org/ebird/hotspot/L3718383 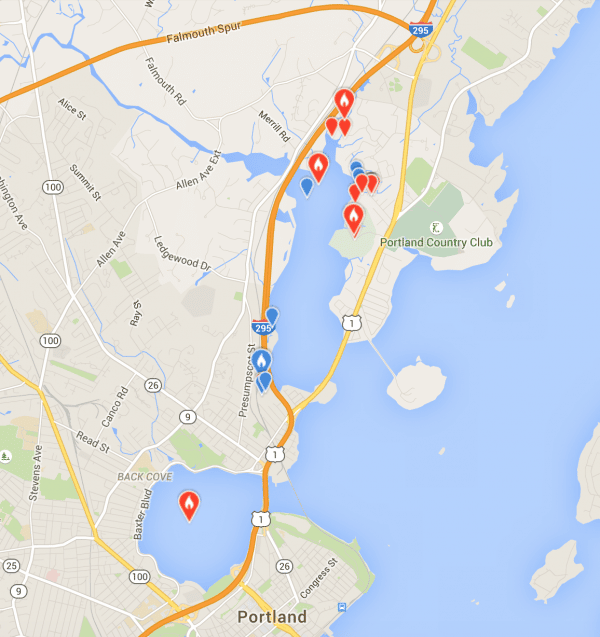 Tip 3: Know when to go.
I’ve had the most luck by looking for the Little Egret on the incoming tide. At low tide there are extensive mud flats for the bird to be feeding on and therefore a huge area to look. One of the last areas of mud to be covered on the incoming tide is located just off the North Meadow at Gilsland Farm, which is why so many sightings are from there. As the tide comes in, the bird spends most of its time further up in the marsh — beware it can be tough to see amongst the tall grasses. Below is a chart that plots the number of Little Egret sightings (as reported to eBird) from July vs. the stage of the tide at the time of the sighting. As you can see, the majority of sightings are during the low-to-rising tide. In the chart below, each colored line represents a different sighting and the length of the line represents the duration of the sighting. Again you can see that the majority of sightings are during the low-to-rising tide Put it all together:
My ultimate recommendation for seeing the Little Egret would be to sit at the North Meadow blind shortly after low tide and wait. Be patient. While I’ve watched it, the egret never spends much time in a single location; it is very active and seems to go wherever the most fish are. Just because the egret isn’t off the blind right when you get there, doesn’t mean you should instantly go check all the other locations. Be patient. Let the bird come to you.