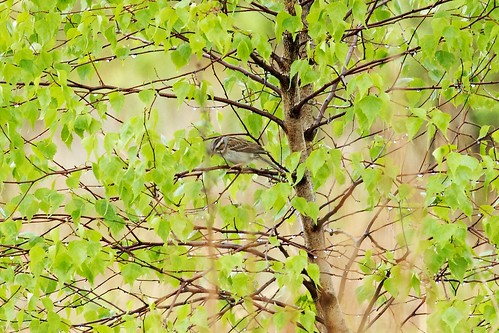 York County
An ACADIAN FLYCATCHER was well documented at Fort Foster in Kittery on the 21st. On the 26th, a BLACK TERN was seen from the beach at Biddeford Pool. A RED-HEADED WOODPECKER, first reported on the 20th, was seen again on the 27th in a Hollis yard.

Greater Portland
A RED-HEADED WOODPECKER was present in a Pownal yard beginning on the 22nd and continuing until at least the 24th. Rare in the spring, an AMERICAN GOLDEN-PLOVER and a BUFF-BREASTED SANDPIPER were reported in the Scarborough Marsh on the 26th, the plover continued on the 27th. A TRICOLORED HERON and possibly two WHITE-FACED IBIS continue to be seen around the marsh. Maine’s first EURASIAN COLLARED-DOVE spent the 28th at 51 Carroll Street in Falmouth. The bird was seen visiting the feeders here then spent the day roosting in trees around the yard.

Kennebec River Valley (Augusta-Waterville)
A BLUE-WINGED WARBLER continued at the Bond Brook Recreation Area in Augusta on the 23rd.

Midcoast
On the 23rd, an AMERICAN GOLDEN-PLOVER was reported from Popham Beach State Park in Phippsburg. A SUMMER TANAGER was seen here on the 25th. A PINK-FOOTED GOOSE was photographed at the Great Salt Bay Wildlife Preserve in Damariscotta on the 25th.

Highlights from Monhegan Island this week included: a late AMERICAN TREE SPARROW and a CLAY-COLORED SPARROW on the 23rd, a HOODED WARBLER on the 25th, an ACADIAN FLYCATCHER on the 25th and 26th, a WHITE-EYED VIREO on the 27th and an ORCHARD ORIOLE seen almost daily.

Penobscot Bay
Returning for the 9th year, a RED-BILLED TROPICBIRD has returned to Seal Island as of May 14th.

Downeast
Six BLACK-BELLIED WHISTLING-DUCKS were found at the ponds at the Mount Desert Island High School on the 28th. This could represent only the second documented occurrence of this species in Maine. These birds may have been present the day before at Echo Lake in Mount Desert.

Western Mountains
A DICKCISSEL was seen off Harbor Road in Fryeburg on the morning of the 24th.

Maine is in the midst of a new era of renewable energy development, spurred by legislation that requires 80% of Maine’s electricity come from renewable resources by 2030 and 100% by 2050. These targets are amongst the most ambitious in the country and are necessary to stave off the worst impacts from climate change. But […]

Words, art, and nature combined for a very special event last week, In the Shadow of a Pine: Black Poets from Maine Respond to David Driskell. On a warm summer evening, visitors to Gilsland Farm Audubon Center were treated to a selection of poetry as five poets gave readings at three locations around the sanctuary. […]

Welcome to the best month for planting in Maine! September offers the perfect combination of cooler nights, high dew points, warm soil, and, typically, more rainfall. Plants that go in the ground this month will have a few weeks to settle, root out a little, and become dormant for winter. Plants planted in early fall […]

September always brings a tinge of sadness for those of us summer-loving sun seekers. All of a sudden, the nights are cool and the kids are back in school.  This September in particular threatens to lower my spirits. Summer gatherings brought so much joy, and just when we thought we could safely socialize, now there’s […]

One possible headline for a story about the 2021 Piping Plover season could be “Endangered Birds Break Records on Maine Beaches in 2021.” That wouldn’t be wrong, and yes, there would be much to celebrate. More Piping Plover pairs than ever before fledged chicks. In 2020, 98 plover pairs fledged 199 chicks. This year, 125 […]